HomeWorldPush back disgrace came out from under Greece's migrant operation
World

Push back disgrace came out from under Greece’s migrant operation 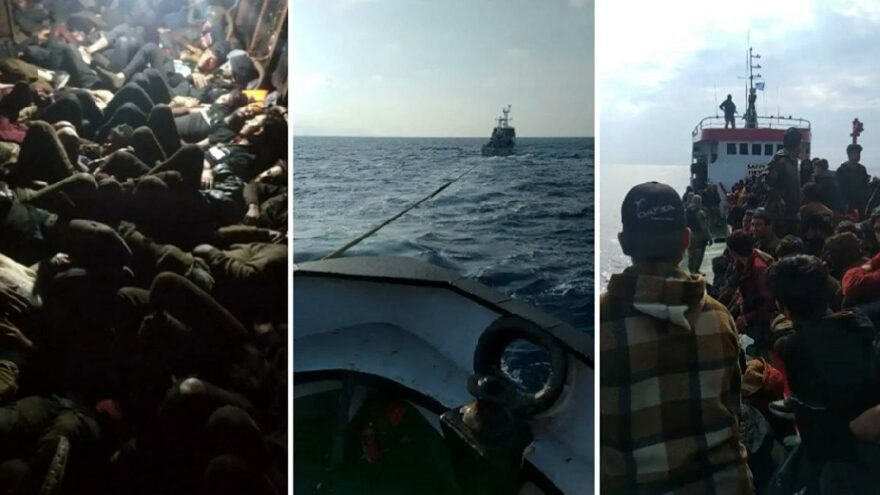 It turned out that the statement made by Greece regarding the dry cargo ship that had 385 immigrants in the Mediterranean and drifted because its engines broke down, “We carried out the largest immigrant operation in history” consisted of a scandal.

After the Greek coast guard teams called for emergency help for 385 migrants drifting in the Mediterranean and allegedly departing from near İzmir on October 29, it was revealed that they left the ship in the middle of the sea for days and tried to push it into Turkish waters.

Non-governmental organizations described the arrival of 385 immigrants on the ship to Kos (Kos) Island after days, as an “unnecessarily prolonged ordeal” at sea, in the event that Greece described as “the biggest rescue operation of the last ten years”.

SHOULD BE TAKEN TO THE NEAREST PORT

President of the humanitarian organization Intersos Hellas in Greece, Dr. “The men, women and children on this ship sought protection and had to be taken to the nearest safe harbor after the ship had sent a distress message,” Apostolos Veizis told the British newspaper The Guardian.

Stating that the nearest safe harbor is only a few miles away, Veizis pointed out that the ship was held for four days and lacked access to basic services during this unnecessary extension.

IT WAS NEAR CRETES

Tommy Olsen, the founder of the Norwegian non-governmental organization Aegean Boat Report, which monitors the refugee movement in the Aegean, stated that the first photographs and videos of the passengers seeking help reached their hands at around 08:30 on the 29th of October, when the incident took place.

Stating that the ship was crammed with people and the shores of Crete Island were clearly visible, accompanied by the Greek coast guard patrol, Olsen said he was astonished because the Greek authorities refused to accept the position of the ship. Aegean Boat Reporter has shared all the videos and photos of Greece’s scandalous pushback on its website.

Stating that it was strange that the Greek authorities insisted that the ship could not be found and then tried to move it away from Crete, Olsen said, “This made us think that we are dealing with the biggest push-back operation seen in years.”

It turned out that the dry cargo ship that Greece said we could not find was 2 miles off Crete.

THEY WERE PUSHING THE SHIP TOWARDS TURKEY

Pointing out that the ship was drifting towards Turkey in the open sea from that time on, Olsen said, “The geo-location information of the ship was reaching every hour and I could see that the ship was going backwards and forwards. In the early hours of Sunday, passengers were allowed to disembark after traveling 500 kilometers away. During this time, people sent messages that they were not even given water, and that some of them were very sick,” he explained.

Greek authorities initially admitted that the Turkish-flagged ship Murat 729 was in international waters off Crete and applied to Turkey to take the ship back. Turkish authorities rejected Greece’s offer, and Minister of Immigration and Asylum Notis Mitarakis stated that they would send the immigrants to their countries and sent them to Pili Immigrant Camp on Kos Island, 7 miles from Bodrum.

- Advertisement -
Share
Facebook
Twitter
Pinterest
WhatsApp
Previous articleFlying dancers, divers and fantastic flamingos: Mexico came to Old Arbat
Next articleWhen are the disabled teacher assignment preferences? When will the quota of teachers with disabilities be determined?

‘If Biden does not run, who will be the Democratic nominee?’ poll: Two women are way ahead

South Africa – Cases can triple due to Omicron

This is the year of Robert Lewandowski’s 2021. The gulf in goals [DOROBEK, REKORDY, TROFEA, NAGRODY]

Schools were suspended in Istanbul

Oscar passenger will be released from Izmir Short Film Festival

Lithuanians were struck by budget spending on Svetlana Tikhanovskaya: 400,000 euros

The success of Polish designers in Dubai. “We went to the fair, and we came back with the opening of the show”